We recently spent a weekend in Milan where we got to see some of Da Vinci’s work. It wasn’t very clear when we bought our tickets, but we found out that visitors get precisely 15 minutes to see The Last Supper, and tickets have to be booked sometimes months in advance! There was another exhibit where we got to spend a few hours – the Biblioteca Ambrosiana. This fifteenth-century library now houses thousands of original artworks, including a subset of sketches by Da Vinci. Our hours here were far more inspiring and fascinating than we had expected. 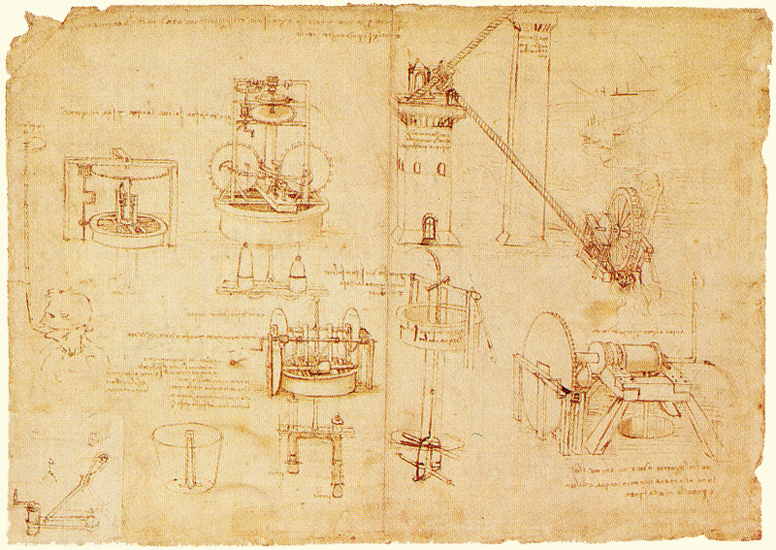 But to really get a sense, you may have to imagine – Imagine standing face-to-face with a parchment that has seen 500 years of aging, with beautiful hand-writing, recording the observations and details about a device that was itself hundreds of years ahead of its time. Now imagine walking through an entire room of such sketches, each one outdoing the other in ingenuity & subject. From human anatomy, birds, aerodynamics, bridges, military vehicles, fossils, hydraulics – it felt like there wasn’t an area of enquiry which had not intrigued him. Nothing can truly describe the sense of awe and wonder we felt on seeing some of his work. We were quite speechless, and humbled by this towering intellect, this giant among men, this most gifted of painters. He is most well known as a painter, in popular parlance as “the guy who painted Mona Lisa”. As a painter, says Mirra Alfassa, he was “the greatest, if not one of the greatest“.

The Seeds of Modern Europe

I came across this revealing quote that threw light on what Leonardo represented in the context of the renaissance & modern-day Europe.

“Augustus Caesar organised the life of the Roman Empire and it was this that made the framework of the first transmission of the Graeco-Roman civilisation to Europe—he came for that work and the writings of Virgil and Horace and others helped greatly towards the success of his mission. After the interlude of the Middle Ages, this civilisation was reborn in a new mould in what is called the Renaissance, not in its life-aspects but in its intellectual aspects. It was therefore a supreme intellectual, Leonardo da Vinci, who took up again the work and summarised in himself the seeds of modern Europe.”

It is quite impossible to appreciate the phenomenon of Da Vinci without understanding the temperament of the age in which he took birth. How do we grasp the import of his phenomenal discoveries in anatomy, for instance? – hundreds of years before modern europe rediscovered them. Da Vinci worked tirelessly against the norms of his age, pursuing single-mindedly the truths of the human body when it was considered heretical to touch, leave alone dissect corpses of “good Christians”.  These lines below give us some idea of the context.

“The individualistic age of Europe was in its beginning a revolt of reason, in its culmination a triumphal progress of physical Science.

..The dawn of individualism is always a questioning, a denial.

“The individual finds a religion imposed upon him which does not base its dogma and practice upon a living sense of ever verifiable spiritual Truth, but on the letter of an ancient book, the infallible dictum of a Pope, the tradition of a Church, the learned casuistry of schoolmen and Pundits, conclaves of ecclesiastics, heads of monastic orders, doctors of all sorts, all of them unquestionable tribunals whose sole function is to judge and pronounce, but none of whom seems to think it necessary or even allowable to search, test, prove, inquire, discover. He finds that, as is inevitable under such a regime, true science and knowledge are either banned, punished and persecuted or else rendered obsolete by the habit of blind reliance on fixed authorities..
He has to rise in revolt; on every claim of authority he has to turn the eye of a resolute inquisition.. “

The Age of Individualism and Reason, Sri Aurobindo [/quote]

An illegitimate child to ‘ordinary’ parents, Leonardo was denied a formal education and therefore had no access to Latin or Greek. All of European science’s highest thought were expressed in these two languages. And this “supreme intellectual” found a way – to build all his understanding and knowledge by Experience.

“All sciences are vain and full of errors that are not born of Experience, the mother of all Knowledge.”, he said.

He was the perfect scientist, in a broad sense of the term. He took nothing for granted, and established by direct & patient observation the basis of his theories for everything.

I found these quotes of Da Vinci significant because they echo the wisdom of ages of western & eastern thought. More, it shows the depth of his understanding of the aim & purpose of human evolution.
[quote]

“One can have no smaller or greater mastery than mastery of oneself. ”

“You will never have a greater or lesser dominion than that over yourself…the height of a man’s success is gauged by his self-mastery; the depth of his failure by his self-abandonment. …And this law is the expression of eternal justice. He who cannot establish dominion over himself will have no dominion over others.”

BBC produced a wonderful 3-part docu-drama on his life & work in ’04 (4 hours run-time). During the series, three separate research teams  successfully build,  & test some of his designs, risking much in the process. You can see the entire docu-drama here:

‘Produced by the BBC, “Leonardo Da Vinci” (2004) is a portrait of a genius of extraordinary diversity. The three-episode docudrama reconstructs the life of Leonardo from early childhood to death. Religious attention to detail along with masterful acting and brilliant costume bring Leonardo to life in a way never seen before. The atmosphere and scenery of his time are given a beating heart, conveying a believable feeling of a society rising from the middle ages.’